The Alpines Golf Society get their winter season off the mark on Thursday, 3rd October 2019.  The Alpines would be regarded as the biggest society within the Club, often with more than sixty golfers on the course.  Playing each Thursday afternoon throughout the winter they tee-off between 12md and 2pm.

The cost to join the society is £35 and that covers the cost of all the weekly prizes through the season and one evening meal.  Traditionally they hold two functions, one at Christmas and finally at the end of the season after their Captain’s Day.  This year the new Captain and leading the society into 2020 is Ray Logan and Ray is keen to welcome new members.  Just come along on any Thursday and join up.  It’s a great way to make new friends and enjoy golf throughout the winter.  The craic in the John Nelson Room is renowned – you’ll not regret it!

We have created a new society page on the website for the Alpines and this can be found under the Members Area.  We hope to keep you up-to-date with their society news as they progress through the winter.

If you are part of a society within the Club and would also like to have a similar page on the website then get in touch.

Society updates will appear here (listed from by newest update):

Thus far the weather in 2020 has been none too kind to the Alpines but on Thursday past they enjoyed a little relief when faint rays of sunshine appeared with an absence of wind of any note. Those benign conditions allowed Brian Miller to excel over the front 9 holes winning 1st prize with a fantastic 26 points. Brian can be seen being congratulated by Alpine Captain Ray Logan. 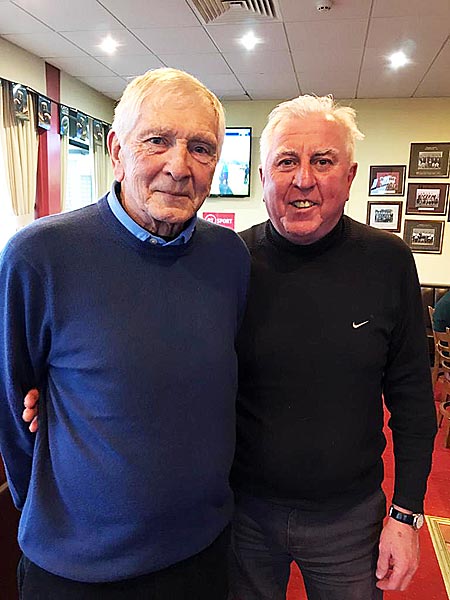 Incidentally new members are welcome throughout the year, just call into the Club any Thursday lunchtime.

The Alpines battled the rain today when the green staff managed to have open 9 holes for their Christmas outing on Thursday,12th December. Of the 34 members of the society that donned waterproofs there was one stand-out golfer on the day – Paul Forde with a competition busting 25 points. Over 50 were in the clubhouse to see Alpine Captain Ray Logan present the prizes after a fantastic meal accompanied by great craic. 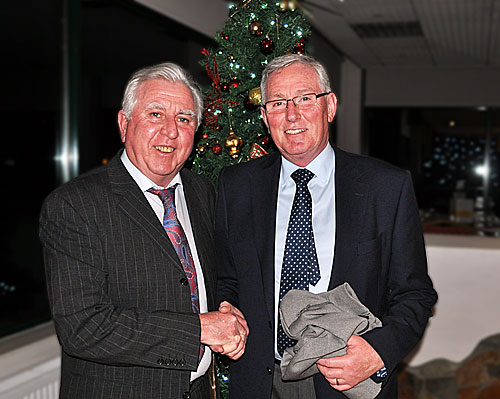 The Alpines got lucky and managed to get back into the clubhouse before the rain fell, although at lunchtime, looking out the window it looked very cold with a breeze making it even colder. But undeterred and putting two or three layers of clothing on, out they went. All 52 of them.

In the end there was the one stand-out score from Marty McIlveen with 22 points over the front nine – three shots better than his nearest challenger.

The Alpines were back in action with improved scores over the previous couple of weeks, none better than Past Captain and President of the Club Tom McNulty. Over the 13 holes Tom managed to accumulate 33 points, three more than nearest rivals Brett Borkowski and Charlie Neill. In 4th place was last week’s winner Ray Martin with 29.

More good than bad. That would be a fair description of weather conditions the Alpines faced on their third outing of the year and as a result 48 cards were returned by those taking advantage of the opportunity to play competitive golf in a fun atmosphere.

Prior to the presentation of prizes Alpines Captain, Ray Logan, made two special announcements. First was the 77th birthday of Tom McNulty (past Captain and President of the Club) who was serenaded by a rendition of Happy Birthday. Secondly Ray congratulated Brian Hutchinson (another past Captain and President of the Club) on being elected as the Chairman of the GUI Ulster Branch, a great personal honour and also for the Club.

With rain sweeping across the course over lunch there appeared little chance of enough golfers making a quorum for a competition, especially as the forecast was for more rain. But the Alpines are made of stern stuff and the competition went ahead over the front nine holes. Who would have believed it – the rain disappeared and the sun even appeared to create a lovely afternoon.

To win, you’d needed to better Billy McAllister’s magnificent 23 points and that wasn’t going to happen in a hurry, the nearest being John Rutherford with 21 points. 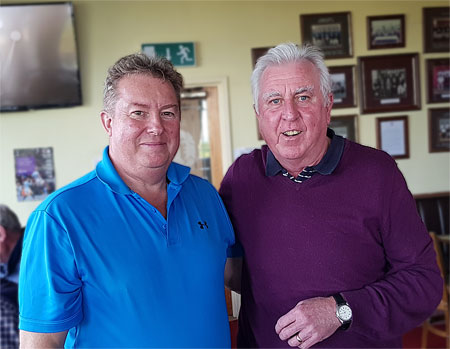 Chief organiser and foundering member Victor Stephens turns 90 and this milestone was marked with a small presentation. Very many happy returns Victor! 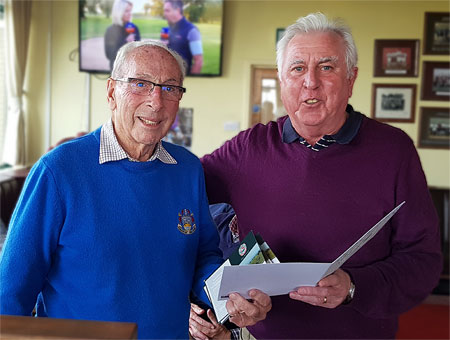 Storm Lorenzo wasn’t enough to prevent the Alpines from getting their new winter season underway.  It did though deter many, other than the 23 brave hearty golfers who took to the fairways beginning their round into the wind along the 1st and 2nd.  Relief coming on the tee boxes of the following two holes with opportunity for personal best drives with the powerful breeze now on our back.

Alas respite was only temporary as with the addition of the now falling rain many didn’t make it through all 13 holes.  Some dropping out at the 9th and others happy with just the four holes.  The conditions were reflected in the scores BUT don’t let that deter you if you are thinking of joining this weekly society.  We can’t promise you warm sunshine but it’ll not be weather like today every Thursday.

This was Ray Logan’s first event as Captain of the Alpines and he can be seen (on the left) with today’s winner John Crockart. 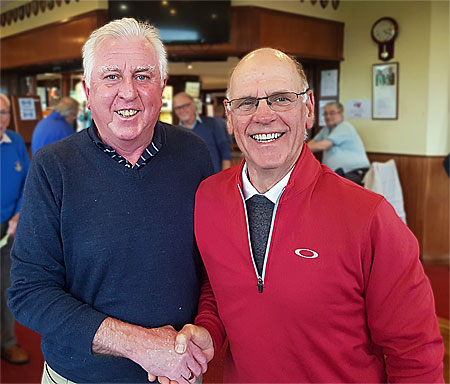