Having started in 1972 as a competition between clubs in Connacht and Leinster, the Irish Mixed Foursomes has evolved into a National event, and is now in its 40th year as Ireland’s only Mixed event at adult level. With entries exceeding 325 clubs each year, there is immense competition within clubs to secure a place on the club Mixed team. Club panels generally include up to 12 men, and 12 women, all competing for a place on the ten-person team, made up of five pairings. This means at the start of each season there are almost 8,000 men and women involved in the Irish Mixed Foursomes hoping to reach the National Finals.

Our team captains for 2019 are Brett Borkowski and Fiona McGhee who will be looking for golfers to represent the Club in the qualifying event at Clandeboye (over the Ava course) on Sunday, 19th May. The team will tee off from 11.20am in the company of Helen’s Bay and Royal Belfast. Competing pairs cannot have a combined handicap lower than 19, with handicaps based on the previous calendar year – providing they returned at least four qualifying cards. Could any member interested in representing the club in this competition please contact Brett (07515941387). Ladies can contact Fiona (07971859297).

Last night saw “The Dee” mixed foursomes team nearly pull victory from the jaws of defeat against an exceptionally strong Mannan Castle side. It was easy to see how in recent years Mannan had done well in the mixed, including an Ulster title a few years back.

Behind for most of the match and despite at one point on the back nine being down in four matches the Dee team battled fantastically well to get themselves back into it.  The golf was starting to heat up in particular in match’s one & three where Andy & Anne and William & Rhona were playing some strong mixed golf.

With victories from Andy & Anne after a par at the 16th and William & Rhona winning 2up on the last green, after winning the last two holes this now had us tied at 2-2 and all of a sudden the Dee team were in a real battle as Mark & Fiona slowly clawed their way back from 4 down on the back nine.

A great up and down from the Mannan pair salvaged a par and a halve on the tricky 16th after a sensational 2nd shot to ten feet from Mark had set up a safe par for the Dee pair.  Dormie two down it was. At 17 both men were out of position of the tee however it was the Dee pair who recovered after two good shots from Fiona & Mark to close the gap to one.

Onto the last, the long par three which was always just out of reach of both ladies. With both balls coming to rest within 10 yards of the sloping downhill green and Dee needing to win the hole.  Mark played a nice pitch to around 10 ft however, it wasn’t to be.  Agonisingly the ball just broke below the left edge of the cup and stayed above ground and it was Mannan who progressed.

On another night it could have been us who progressed. Two closely matched teams and it came down to the last putt on the last green of the last match out on the course.

Thanks to the Club President John Caldwell, Brian Miller, Lorna Thomson, Gareth Stranaghan & Alison Strain for their support last night on the course. Also, to our club captains Jim & Valerie for their support over the past few months. We are not far away from the finished article and will return in 2020!!

On Thursday 6th June The Dee’s mixed foursomes team travelled across to the Ava at Clandeboye for the knockout match versus Blackwood. 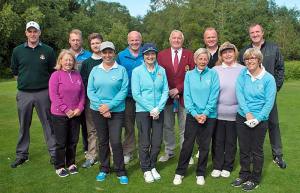 The first match saw Andy & Anne play some solid golf but a birdie, net birdie start in the first two holes by Blackwood had them on the back foot. They dug in deep but another birdie at 9 from their superb opponents had them chasing the game and they ultimately lost. They Dee pair would have won most mixed matches with their golf tonight but came up against a pair that were on-fire right from their birdie at the first.

Meanwhile behind Carol & Nigel got off to a flier and were 4 up after 5. A lovely birdie at the 5th allowing them to take control of the match. They continued to play well and very quickly had the first point on the board for The Dee. A superb round of golf.

In behind it was all getting very tight in matches 3 & 4.

Match 5 saw Ryan & Lorna moving between one and two down, however their opponents won 12 & 13 to go 4 up and ultimately deliver the point for Blackwood.

At this point in match 3 Mark and Fiona were level playing the 14th and in match 4 Aaron & Rhona were 3 up playing 13th.

With a win for the Dee pair at the 14th, after Fiona’s drive put them in a good position the next two holes were halved. Blackwood holing a 10ft putt on the 16th for par with Mark then holing a 5ft to stay one ahead with two to play. A perfect tee shot from both pairs left the pressure on both the ladies. Blackwood came up just short of the green and Fiona then found the green to 20ft where a great first putt from Mark saw them (Blackwood) conceded their par and leaving the opposition pair a 15ft putt to stay in the match. It just missed and the Dee pair had levelled the tie at 2-2.

In behind the Dee pair had lost the 14th & 16th to have their lead reduced to only one hole with the tie depending on their match now. On 17th the Blackwood team captain split the fairway and the Dee got a bit of a fortuitous bounce at the left of the green from Aaron’s tee shot. After the Blackwood approach went long, Rhona composed herself and hit a superb pitch from the rough to 20ft. But, more drama was to follow. After Blackwood nearly holed their pitch, Rhona then had a 2ft putt for her par and a halve and she calmly rolled it in.

Blackwood were on the tee and their drive went out of bounds left. Rhona then using her experience played down right side of the hole towards the 13th. Blackwood narrowly missed their 5 with the second ball and with the Dee sitting close to the pin the hole was conceded to Aaron & Rhona.

A great win for the Dee in a really tight match that could have gone either way. Blackwood had the upper hand early but the Dee team fought back for the narrow win.

Thanks to the Club Captain, Vice-Captain & Lady Vice and all other members from both branches who turned up to support the team. It was great to see the friendly faces on the course and is appreciated.

Teeing off at 11.20 the Dee team took to the tight fairways of the Ava looking to qualify for this year’s knockout stages.  The message the team shared before teeing off was simply have fun and never give up no matter how bad the hole or round is going. Every shot will count. 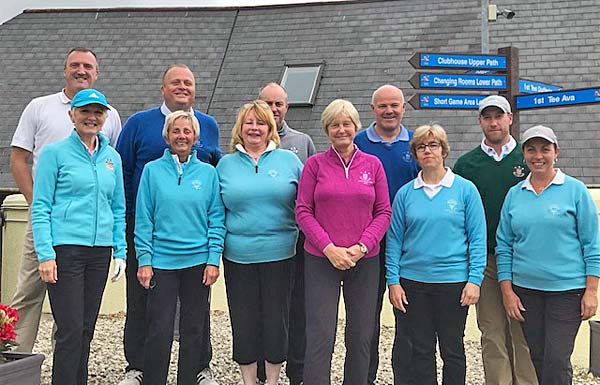 With Andy Clegg suffering a back injury the day prior there was a last-minute change to the line-up with Brett stepping in to the first pair alongside Anne.

The Dee pair looked to have got off to a shaky start after Brett’s tee shot went left off the first and Anne had to hit a provisional off with the crowds gathered around. Luckily the ball was found and after escaping from the trees having played 3 shots a majestic 4th approach shot from Anne allowed Brett the chance to hole an 8-footer for an unlikely 5 and the Dee team were off and running before parring the tough par 5 second.

Mark & Fiona parred the first however found trouble at the second. Getting the least shots in the team this could have caused them some issues but they bounced back with pars at 3, 4 and 5.

The third pair saw Alan and Rhona start off strong and produce an outstanding front 9 which finished with Alan hitting a great tee shot into the heart of the par 4 9th to set up an eagle opportunity which delivered a lovely birdie to finish the front 9. 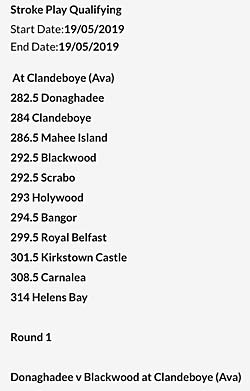 Ryan & Lorna came next and despite some bad bounces & bad luck they battled away to keep the card in play. Both experienced players knowing the importance of having all 5 cards going into the back nine.

Meanwhile the last pair Nigel & Carol were doing what they do best. Consistent steady golf and backstopping the team fantastically well knowing it could come down to them given that they were the last group on the course.

As the team moved into the back 9 they were going steadily along and the opportunity to qualify was definitely on.

Anne & Brett overcame trouble at the 11th to post a 72.5. Some fantastic play from Anne kept the pair going to post that score.

Meanwhile behind them Alan & Rhona continued to excel with some great play bringing in the team’s best score and one of the best of the day overall with a 68.5.

After their early mishap at the second. The third pair of Mark & Fiona dug deep to score a 72.5. A great score for the team after the second hole. Fantastic recovery.

This put the Dee team on the verge of qualifying. Ryan & Lorna had kept their card alive and played to the crowd at 18 when they holed from off the green.

By now all eyes were on the last pair with news filtering through from Gerald Bunting that they were still playing super golf and were +12 playing 17 and getting 13 shots. Calmness personified Carol produced a superb second shot out of the trees at 17 onto the front of the green and when the tricky par putt came her way it was duly knocked in.

By this point the Dee team knew that a 5 at the last was going to be good enough to seal the top qualifying spot. However, after a perfect approach to the last, Carol duly hit another great putt to leave Nigel the simplest of tap ins for a net 69. This gave the Dee team a total of 282.5 ahead of home club Clandeboye on 284.